Founded on July 18, 1968, Intel Corporation is an American multinational technology company. Intel is the global leader in producing microprocessors that power up a wide range of personal computers (PCs) and other devices – commanding 85% of market share in the global market for microprocessors in the PC segment.

However, with global demand shifting from traditional PCs to mobile computing devices, Intel has been facing an uphill battle in the PC sales market –  the bedrock of its past fortunes: 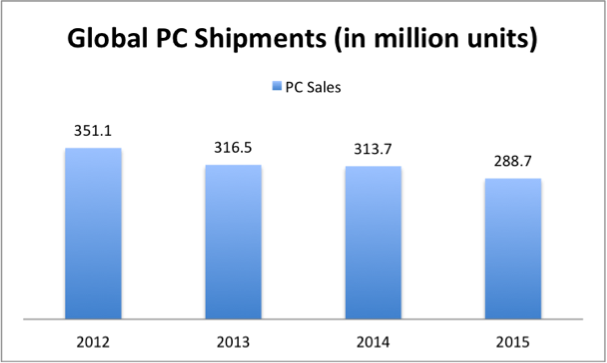 In order to combat these industry challenges, Intel has chosen to refocus its operations into new segments, adopting a paradigm shift in strategy – transforming the company

“from a PC company to a company that powers the cloud and billions of smart, connected devices” – Brian Krzanich, CEO of Intel

Recognizing Asia as the hotbed for the development of innovative tech products, Intel focuses a great deal of energy on this region through its Singapore office and serves as the base for Intel Asia Pacific and Japan (APJ) Digital Hub.

As such, we felt that there was ample opportunity to increase Intel’s voice within the social realm of IoT

Apart from solely observing their online platforms, our group also wanted to further analyse how well Intel Singapore did in conveying its IoT customer value proposition. As such, we looked at the company’s performance during IoT Asia, the one and only IoT-specific campaign launched early this year.

Despite the large-scale event, Intel Singapore failed to leverage successfully on IoT Asia to generate engagement online. As such, we decided to turn to other players in the industry to identify their best practices in conveying IoT on social media.

Business Insider has considered Dell to be one of the most social companies in the world, labelling them as “passionate social listeners” who proactively engage with their customers through their extensive social media network. 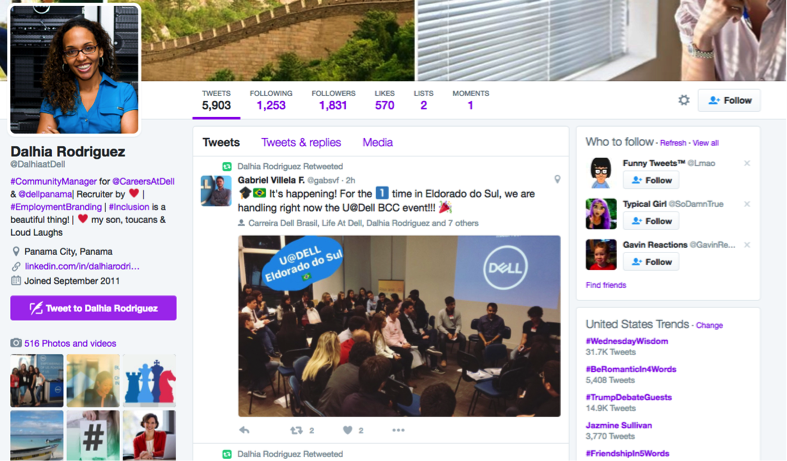 At Dell, employees are activated as company advocates on their social media platforms. They are encouraged to use Twitter handles with the company name included, allowing for a more human and personal interaction with users especially when it comes to information sharing. Dahlia Rodriguez, who is a Community Manager for Careers at Dell, is an example of a company advocate. Dahlia actively engages audiences with tweets of events and programs Dell employees are involved in all over the world.

On a similar note, IBM was also recognised as “The Future of Social Business” by Business Insider in 2011. This stems from the company’s culture of encouraging employees to leverage on social media to support the company’s marketing, communication and sales efforts. 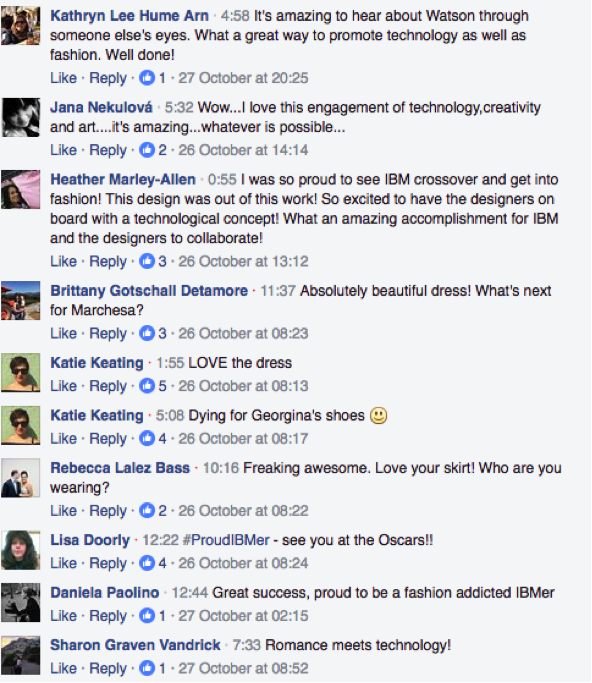 As a result, IBM also uses its employees as brand advocates online. IBM Facebook conducts live streaming sessions of its interviews with its partners, providing a platform for them to share their roles and collaboration with IBM.

For example, IBM Watson (IBM’s IoT arm) and fashion designer Marchesa recently debuted their “cognitive dress” at the Met Gala, the renowned annual fundraising gala for the Metropolitan Museum of Art’s Costume Institute in New York City. Viewers were able to post questions and have them answered live during the Q&A session, generating positive engagements throughout the streaming session.

Both Dell and IBM have successfully integrated their employees as part of their social media strategies – actively seeking employees to communicate the stories of the brand organization.

Currently, keywords generated on social media ranged from “companies” and “future” to “solutions”, suggesting that there is only some semblance of understanding Intel’s overall IoT value proposition. Through our campaign, we hope to increase the tangibility of Intel’s IoT value proposition and to fill up conversational spaces on online with Intel’s IoT solutions.

For this particular campaign, content and conversations will be created around Intel’s Retail IoT Solutions given that Singapore retailers are increasingly turning to technology to boost productivity, enhance customer engagement and to increase brand differentiation. This represents ample opportunities for Intel to introduce its IoT solutions to the retail scene.

Our campaign is targeted towards Professionals, Managers, Executives and Businessman (PMEBs) within the retail industry due to their high salience in which they are able to influence high-cost technological purchases in the decision making process.

“INTELligent Shopping with Intel Inside”

For this campaign, the solution showcased will be the Intel Memomi Mirror: a retail IoT solution that augments the experience of trying on and buying fashion apparel. The mirror has two main unique selling points: Using a combination of Intel Singapore’s existing Facebook and Twitter channels, awareness towards Intel Memomi will be raised through the launch of a Canvas Article, to provide an immersive content format that allows the full integration of videos, text and images.

Using short-form text and bite-sized videos that feature the unique selling points of the Intel Memomi Mirror, this captures the attention spans of the audience and increases their awareness of as well as their interest in the solution.

In order to reach out to an even wider audience apart from existing members on Intel Singapore, sponsored ad targeting will be used – making sure that the canvas article will be viewed by a wider pool of PMEBs that have indicated Fashion, Retail and Technology as part of their interests.

To sustain conversations, members of the community will be engaged constantly to build up their anticipation for an upcoming release of a series of content – including a contest and an Experiential Stand where members of the public can experience the technology behind the mirror.

Phase 2: To generate leads and demand for the applications

Moving into phase 2, an Experiential Stand will be launched in Somerset – where there are a large number of retailers such as Forever21, H&M, Mango, Zara, and Promod.

A contest will be launched to create buzz and hype – encouraging and driving the public to visit the Experiential Booth. In tandem with the contest, an engaging GIF animation will be launched – showing the steps how interested individuals can take part in the contest.

Participants of the contest would be required to share their favourite outfit on their individual Facebook feeds through the social sharing mechanism in the mirror. They would also be required to use the campaign hashtag #IntelligentRetail – to allow us to track their participation, as well as the generic #IntelIoT hashtag to increase discoverability of the posts.

With widespread participation, this contest aims to tap into individual networks on social media – demonstrating and amplifying the viability and usefulness of the mirror.

An expert Intel engineer who worked on the Intel Memomi will also be present at the Experiential Booth, answering questions and personally conveying the value proposition of the technology through a Live Video Stream on Facebook.

The end of the campaign will be marked by a closing post, which will include a Call-to-Action to drive traffic to an Email Lead Generation form. Potential clients will be able to register their interest for the solution using the form, allowing Intel’s Sales Executive to reach out to these leads and to start forming good relationships with these potential clients.

Phase 3: To ensure long-term retention of leads or potential clients

In the long-term, we propose the creation of similar campaigns to create awareness and sustain conversations for other solutions within the Intel IoT eco-system – such as smart manufacturing, self-driving cars and smart home applications.

We also propose the creation of an Intel IoT Singapore page on LinkedIn, where 430 million professionals are gathered. This will allow Intel Singapore to build closer relationships with potential and existing clients by allowing employees to engage personally with them, and through these interactions, be able to serve up content based on solutions that are most relevant to their businesses in future.

Founded on July 18, 1968, Intel Corporation is an American multinational technology company engaged in the design and manufacture of digital technology platforms. In addition to producing processors, Intel also harnesses the capabilities of the cloud, the ubiquity of the Internet of Things, the latest advances in memory and programmable solutions, and the promise of always-on 5G connectivity. 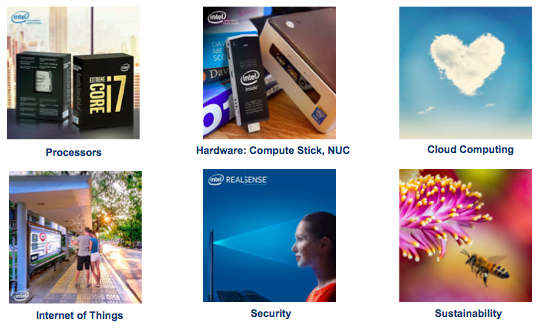 Known for being a successful B2B company that leverages on B2C communications on social media, Intel has a heavy social media presence – ranging from Facebook to its own platforms – such as Intel And Me and iQ.intel.com, a content hub that aims to drive brand affinity with interesting articles and content. 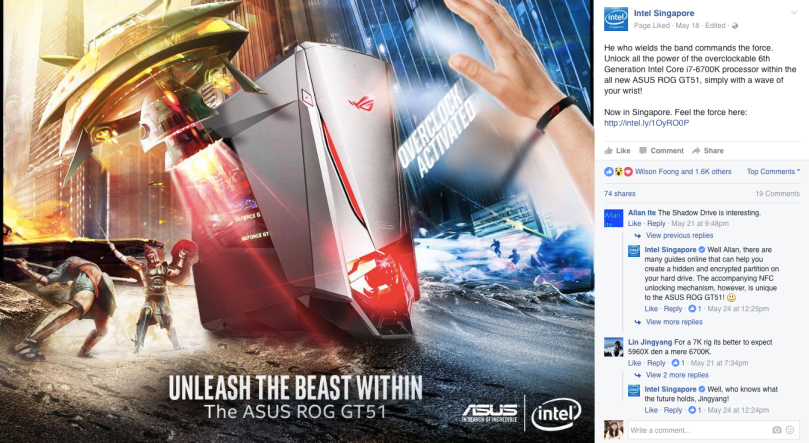 A Facebook campaign that Intel Singapore did in collaboration with ASUS to drive consumer interest in the ASUS ROG GT51 Gaming desktop.

Currently, Intel is facing an uphill battle with its previous strategy of boosting PC sales. 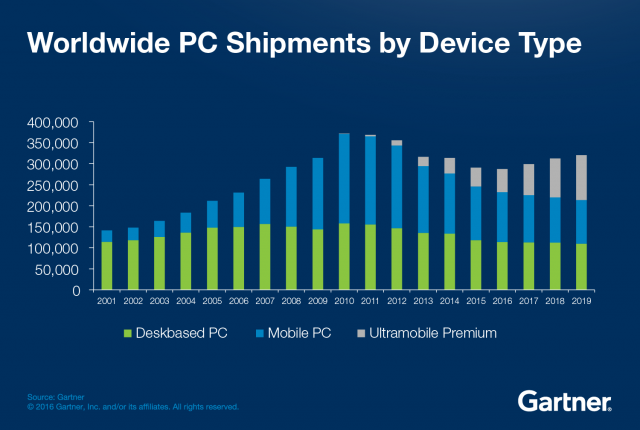 Intel’s chips were the bedrock of its fortunes yet PC sales have continued to be on a global decline. Amid the poor outlook, Intel laid off 12,000 of its workers in April 2016.

As a result of this trend, Intel has been trying to refocus its business away from the declining PC industry towards data centers and the Internet of Things (IoT) – a vision of the world being filled with billions of connected devices.

While conducting our research, we found that most academic studies centered around social media strategies in a B2C context.

As a group, we saw the academic value in exploring social media in the B2B context as well. In light of that, we hope to answer the following question: To what extent can social media be used to further the business objectives of a B2B company like Intel?

For this project, we seek to build a social media ecosystem for Intel that compromises both B2B and B2C communications that will be best aligned to Intel’s business objectives.

This will assist Intel in gaining a first mover advantage and a strong foothold in the IoT industry, which we have previously identified as Intel’s new business focus moving forward.

We propose 3 main steps that we will be embarking on in order to garner a deeper understanding of Intel’s current operations and its future prospects.

Firstly, it involves understanding Intel’s current business environment, challenges and objectives. This helps us to identify target consumers or businesses that are interested in diving into the IoT solutions industry.

Secondly, we seek to evaluate Intel’s current social media performance using the traditional metrics of engagement such as the number of reactions, shares and comments. This will be complemented by a qualitative analysis of the comments they have received in their campaigns. This will help us to identify gaps in their current strategy, and to make recommendations on improvements.

Lastly, by evaluating the performance of other B2B businesses on their current strategies we hope to learn the effectiveness of potential media channels. We will then apply our learning to assist Intel in utilizing social media to drive its message.