Hi Everyone!
Here is our proposal for our analysis of Jetstar Asia’s social media strategies.

Background
Jetstar Asia Airways is a low-cost airline based in Singapore, managed by Newstar Holdings Pty Ltd which is owned jointly by Singapore Westbrook Investments (51%) and Qantas Group (49%). The company runs under the Jetstar group’s umbrella. Its mission is to “offer low fares to enable more people to fly to more places, more often”. It was first launched in December 2004 and provides services to 22 popular destinations across North and Southeast Asia. Since then, it has achieved several accolades from various reputable organisations. Due to its late entry into the market, the airline differentiated itself from its competitors by flying further; anywhere within a 5-hour radius from Singapore. Going forward, it aims to expand into many new routes among the Asia area in the future in order to obtain wide international coverage.

Problem #1
These complaints tarnish its image as its consumers are active social media users and are thus highly influenced by words of mouth and online review. This is further supported by a 2012 Nielsen’s annual global social media report which revealed that 67% of Singaporeans’ choice of travel related purchases are based on social media websites. To make the matters worse, we have observed that Jetstar Asia tends to give standardized or perfunctory responses to customers complaints, without addressing individual customer’s real concerns. While complaints for poor customer services are common in aviation industry, its competitor airlines such as AirAsia and TigerAir tend to attend to the complaints in a timely and customised manner. As a result, Jetstar Asia fails to portray itself as an airline that cares for its customers and suffers a severe loss of customer trust and good image. These customers are then turned away from Jetstar Asia to other airlines, leading to a loss of existing customer base.

Problem #2
Jetstar Asia’s target destinations are Southeast and North Asian countries such as Myanmar, Cambodia, Thailand, Hong Kong and China. From our research, we have observed that all of its social media platforms use English as the sole communication language. Although some social media sites such as Facebook allow users to change their language settings, posts by Jetstar Asia are still in English language. This raises another problem for Jetstar Asia as this current social media strategy creates a communication barrier with its target customers. According to EF English Proficiency Index 2015, which ranks countries by English skills, many of Jetstar Asia’s destination countries are ranked to have very low to moderate proficiency in English (Figure 1). This means that many of its marketing strategies and campaigns to increase customer engagement on social media platforms may not be able to reach out to its intended potential customers effectively, leading to a loss of potential profit. 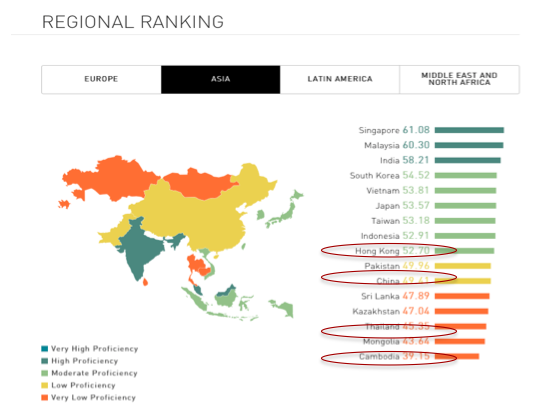 Practical Value of Study:
Our recommendations aim to serve as content strategies that will fulfil the following objectives:

– Analysis of Instagram accounts of Jetstar Asia and competitors.

– Analysis of other social media platforms of Jetstar Asia and competitors.

Finding the feasible media platform for the message
We will be doing secondary research (surveys/researches carried out before) to find out Jetstar Asia’s target audiences and the social media platforms that they mostly use.

After we have pin-pointed our target customers, we plan to conduct a focus group (qualitative research) discussion with them to measure how receptive they are to our new proposed social media strategies. Their responses would allow us to gauge and estimate the success of our new strategies. For instance, focus group with potential customers from target destinations could be carried out to find out how much more they are incentivised to fly with Jetstar Asia if its social media posts are in their native languages.

Analysing the effectiveness of potential media channels to deliver the message to the target audience
We will be measuring the outcome (direct or indirect) that results from implementing our proposed strategies on the potential media channels, by tracking the number of likes/comments/shares. If the outcome is good in terms of more likes/number of shares/ hashtags on social media platforms and more turn-up rate for events/competitions, then these potential media channels would have successfully delivered our intended message to the target audience. One possible limitation is that some customers may not be bothered to like or share the Facebook pages and posts even though they have benefited from the new initiatives. Hence, a more indicative measure to assess the effectiveness would be to look at the sales of ticket or booking rates.

Conclusion
Jetstar Asia is currently facing two problems which are significantly tarnishing its reputation and have repercussions on its profitability level. Thus we aim to utilize the data and insights gained from our analysis of its existing social media strategies to propose new strategies that would allow Jetstar Asia to manage crises effectively in the future.