Hello Prof and friends! Here is a summary of my individual report about one of my favourite people of all time, Pope Francis.

Pope Francis is the Pope of the Catholic Church, which is one of the biggest denominations under the umbrella of Christianity. It has been found that the Christian population worldwide has shown steep declines. This could be due to the increasing number of lapsed Christian youths. In America, only 27% of millennials are Christians, compared to 85% of adults! Could it be that Pope Francis has had little influence on these nonreligious youths? Furthermore, such a large proportion of nonreligious or lapsed Christian youths is a cause for concern, as research has shown that the nonreligious contribute to greater social problems such as smoking, suicide and delinquency!

On a separate note, millennials, whether religious or lapsed, are taking the world of social media by storm! Youths currently form the majority of the follower bases of all popular social media platforms, including Facebook, Twitter, Instagram and Snapchat. There has also been a prevalence of religious leaders’ taking to social media to reach out to these youths! Besides Pope Francis who has a total following of 28 million on Twitter, other leaders such as Dalai Lama has 12 million. Research has found that Christian leaders’ tweets have 30 times greater influence than pop stars like Lady Gaga (where has she even been?!). This looks like a great opportunity for Papa Francis to capitalize on his social media power to reach out to those lapsed Christian youths!

Hence, my report aims to explore this research question: How can Pope Francis use social media to engage Christian youths to regain interest in their faith?

To analyse the strengths and weaknesses of Pope Francis’ social media strategies, I have chosen to analyse the Twitter accounts of Joseph Prince, pastor of New Creation Church, and Ravi Zacharias, speaker and founder of Ravi Zacharias International Ministries, to find out how these Christian leaders are effectively using their Twitter to reach out to followers.

Finding 1: Ravi Zacharias is the most effective in reaching out to youths.

Ravi Zacharias’ target audience consists of university students, as most of his seminars are conducted in Christian universities. He regularly posts live photographs of his seminars and he uses as effective hashtag strategy by attaching event-related hashtags to his tweets. For example, he used the hashtag #RZIMpepp to promote his talk at Pepperdine University, and this created significant buzz with the event-goers.

Joseph Prince’s tweets target a specific audience of Christians and church-goers, however he regularly tweets scenic pictures attached with a Biblical quote and his signature “@josephprince” at the bottom of the picture, to attract the attention of his Christian followers. This is an effective way of creating brand salience, whereby followers will make subconscious connections between his name and the Biblical quote, resulting in an easier top-of-mind recall of how their leader is knowledgeable about the scriptures! That’s pretty smart.

Finding 3: Pope Francis is missing out on opportunities to engage with followers, and is not effectively utilizing creative means of capturing audience’s attention.

Pope Francis’ tweets are simple and minimalistic, without any hashtags, retweets or likes of other users’ tweets. This results in a one-way information flow from himself to his followers. It is evident that Pope Francis is not engaging in meaningful interaction with his followers, unlike Prince and Zacharias! This finding aroused suspicion within me as I wondered why one of the most influential leaders in the world did not capitalize on his large following to interact with them.

However, I found out that his lack of interaction with followers was indeed an intentional one!

Pope Francis’ social media team, the Pontifical Council of Social Communications, operates from the Vatican (office of the Pope), which is entrenched in many historical layers of bureaucracy, hence his team comprises of priests who are used to such heavy red tape and are not open-minded to change. They even “will not consider interactive chats” with followers! The Vatican has also mandated that social media accounts should “Promote Jesus, not Francis”, indicating that their main purpose of the Pope’s social media accounts is to spread messages of Christianity and not bring unnecessary attention to the Pope, lest crazy fanatics obsess over him…

Thus, in light of the above analysis from Pope’s peers and his social media restrictions, two strategies to help the Pope regain interest of lapsed Christian youths are as such:

All of you might have heard or participated in Lee Hsien Loong’s live Q&A forum on Facebook last year. To increase his interaction with followers while still maintaining the necessary distance, Pope Francis should conduct a similar Q&A session with the hashtag #AskPopeFrancis, but with separate timeslots for the questions from followers and the answers from himself. This will occur monthly, on every 1st Sunday of the month, at 12pm.

For example, a tweet from a particular follower could be:

and if his team chooses my question to be answered, Pope Francis (@Pontifex) will reply my question at 1pm (possibly with the answer “Yes Courtney of course, all are welcome to the Church!”)

Even if my tweet does not get answered, the Social Exchange Theory can explain why I would mostly likely be motivated to tweet a question, as the potential benefits of getting my tweet answered outweighs the minimal costs of taking a second to post the tweet!

Pope Francis travels so much every year, and perhaps some of you are going to meet him at World Youth Day in July at Krakow! For his USA visit in 2015, Aleteia (a global Catholic online network supported by the Pontifical Council of Social Communications) organized a successful social media campaign to promote the Pope’s visit. Hence, for Pope’s future overseas visits, the Pontifical Council of Social Communications will collaborate with Aleteia to organise similar social media campaigns. 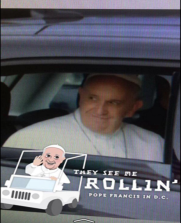 These fun and visual images are similar to how Joseph Prince creates brand salience with his consistent visual branding!

In conclusion, while Pope Francis has yet to reach out fully to lapsed Christian youths, it is with great hope that these proposed strategies will enable him to do so in an effective way, build bridges with them, and encourage them to positively contribute to the society with love and mercy 🙂

Thank you for reading this and have a great day!