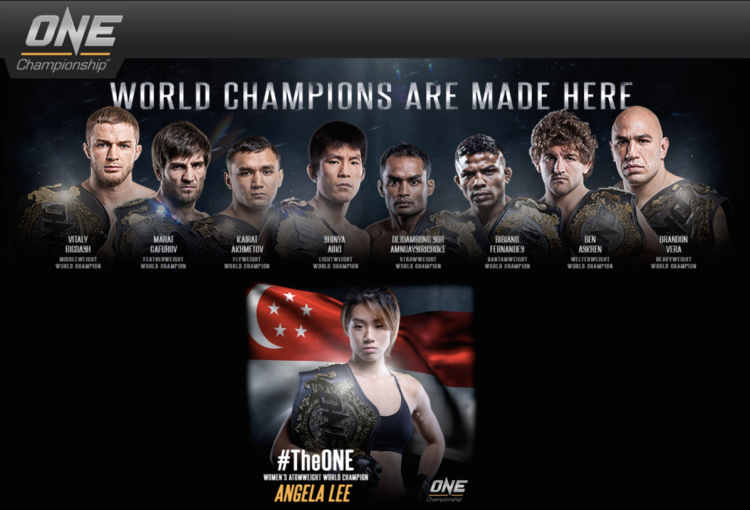 Background
Mixed Martial Arts (MMA) is the fastest growing sport on the planet for the simple reason that people like to see a fight – the less rules the better. One Championship is a Singapore based MMA promotion launched in 2011 and is Asia’s largest sports media property with a global broadcast to over 1 billion homes in 75 countries. It is widely recognised as the biggest MMA promotion in Asia with a 90% marketshare. One Championship currently has over 250 fighters under its banner and partnered with big corporate sponsors including G-shock, Haier, Cannon, and Under Armour.

One Championship’s main competitors in the market are established global players such as the Ultimate Fighting Championship (UFC) and Bellator MMA.

Through this study, we aim to achieve the following:

(1) Increase One Championship’s brand awareness within Asia
The fight events are held in most Asian countries including Singapore, Indonesia, Philippines, Cambodia and China. Through the analysis of the results gathered from Synthesio, it is evident that the events held in Singapore and Philippines generated the highest social media activities whereas lesser buzz was created for those held in Cambodia, Indonesia and China.

(2) Increase engagement with consumers and build a stronger brand community
There are already notable efforts from One Championship in attempting to engage its consumers via social media platforms, but we assessed that more exciting features can be integrated. At the same time, there will be some differences in the engagement strategies in different Asian countries and each should be unique to that specific country as factors such as lifestyle and cultural differences are taken into consideration to ensure maximum engagement with the local consumers.

(3) Improve the brand image of One Championship
Although One Championship is the leading MMA promoter in Asia, ask a typical MMA fan and he/she will more likely than not tell you that the Ultimate Fighting Championship (UFC) is still the most prestigious MMA promotion in the world and One Championship pales in comparison. Granted that UFC has been established 2 decades before One Championship, there is tremendous potential within Asia alone to elevate One Championship’s branding to be on par, if not exceeding that of UFC in the next few years.

One of the common misconceptions of MMA is that it is basically human cock fighting and the brutalness of the sport promotes violence. Although the damage inflicted in competitive fights do sometimes lead to bloody wounds, there are in fact rules adopted by all state athletics commissions known as the Unified Rules of Mixed Martial Arts enforced with fighter safety in mind. These misconceptions, if not resolved at an early stage, would potentially erode One Championship’s brand image and affect the bottomline.

Therefore with our research question and objectives in mind, we will attempt to develop effective social media strategies that we would share with you guys in our next post and presentation.

Methodology
Our research method plans to deliver a good mix of quantitative metrics and qualitative insights to answer the research question:

(1) Analysis of social media strategy
We plan to conduct a comprehensive analysis and evaluation of the current social media content and strategy. The analysis will include:

Conclusion
One of the reasons why we chose One Championship for our project is due to the growing popularity of MMA. Furthermore, the crowning of our Singapore youngest female world champion Angela Lee created a lot of buzz with her recent epic wins and inspired us to took a closer look at One Championship through the lens of their social media efforts, despite our class being female dominated and may not be as interested in MMA sports. Although One Championship has been rather successful in its marketing and advertising campaign, we do see certain areas that could be further improved so as push One Championship to the same level, if not better, than its close competitors.

We will develop a structured social media campaign that aims to complement the existing efforts of One Championship in order to maximize its MMA promotion in Asia.