For our project, our team has decided to work on Suunto Singapore.

Founded in 1936, Suunto Oy is a designer and manufacturer of sports watches, dive computers, and sports instruments for adventurers worldwide. Headquartered in Vantaa, Finland, Suunto’s product line ranges from premium watches to accessories that aid in various sports such as climbing, hiking, triathlon, and many others. Suunto is a subsidiary of Amer Sports Corp. In Singapore, Suunto’s merchandise is available at sports and watch retailers such as World Sports and Royal Sporting House, just to name a few.

Why we chose Suunto:

Internationally, Suunto is a highly recognised brand in its field. Its first GPS sports watch with optical heart rate measurement, the Suunto Spartan Sport Wrist HR, was awarded the Runner’s World Editor’s Pick in January 2017. Other awards won by Suunto include The Outdoor Retailer ‘Best in Show’ Gear for 2016 by Gear Junkie, Editor’s Choice 2016 Award by Competitor magazine and Best New Gear Award: Outdoor Retailer Winter 2016 by GearInstitute, among many others.

Singapore is a promising market for Suunto, as wearable electronics are becoming increasingly popular. Around 73,000 units of smart wearables were sold in 2016, amounting to a 69% increase in retail volume. As for activity wearables, 2016 saw a 28% growth in retail volume. It has been noted that the strong demand for wearable electronics stems from the sharing of exercise habits and fitness on social media. Consumers are constantly on social media, with Singapore having the highest penetration rate of mobile phones and internet connectivity. In their respective social communities, sports and fitness enthusiasts are the main sharers of fitness information among friends on social media. This indicates the complementary nature between wearable technology and social media.

Despite the growing trend for active lifestyles and high social and mobile connectivity in Singapore, Suunto has been unable to fulfill its business potential in the tech wearables segment, even though their products and services are not only on par with but may even be superior to those of its competitors. On its social media platforms, Suunto is lagging behind its competitors in terms of reach, engagement, and interaction on those social media platforms within the Singapore market.

In what ways can Social Media help Suunto improve their performance in the Singapore market? 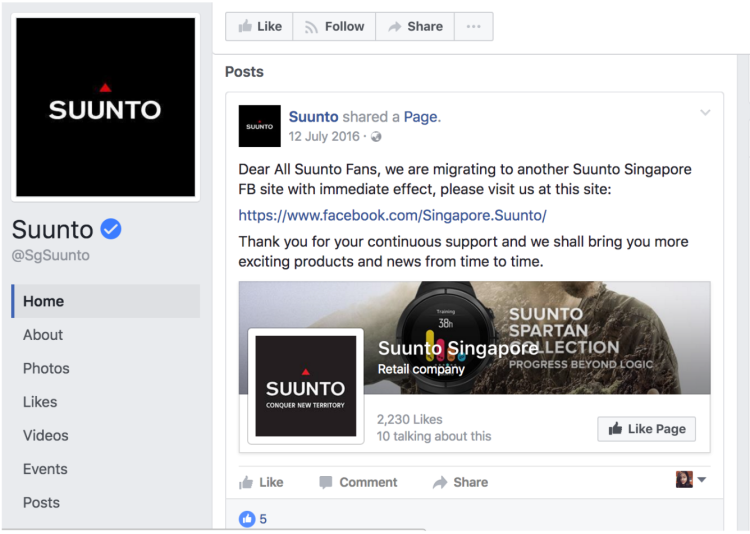 Additionally, Suunto’s current Facebook page only features general event and product promotion details with no co-creation of content, thus, resulting in an unappealing, one-way communication strategy. On the other hand, Garmin shares articles and fitness tidbits and showcase active promotion of their ambassadors in addition to providing consumers with the ambassadors’ lifestyle and training insights in order to facilitate interaction with its consumers.

Therefore, Suunto should capitalise on the complementary relationship between the technological nature of its product and the proliferation of social media in today’s society to reap the benefits of positive network effects arising from the strong sense of community and high levels of density and closeness among members of the fitness community. Hence, an improved social media presence with meaningful relationships built with its target consumers will help translate to higher sales.

Our team intends to utilise social media to increase awareness of Suunto’s differentiated product offerings amongst our target audience, the fitness enthusiasts, by emphasizing Suunto’s rich brand heritage and history of making high precision dive equipment that is rugged, durable, and accurate.

Next, as sales in the industry of fitness wearables are mainly driven by perceptions, our team aims to improve consumer perceptions of Suunto, by positioning it as a top-tier sports watch maker and increasing Suunto’s engagement with its target consumer group through social media.

In addition, in order to better connect with potential consumers, our team aims to improve the content of Suunto’s existing Facebook and Instagram pages by fostering an interactive two-way relationship between Suunto and their consumers.

Lastly, our team will tap into the positive network effects of existing sports communities, such as running groups on Facebook, that are already present on the various social media platforms and leverage on their strong, tight-knit community to enhance customer relations and experience and ultimately increase brand loyalty.

In summary, our goals are to:

Suunto’s messages will be aimed at building positive perceptions of the brand and encouraging consumers to share the brand among their peers with similar interests.

In order to identify the target audience, we will first conduct observational studies at selected watch and sporting goods retailers that carry Suunto’s merchandise. Following, we will seek to confirm our observations and obtain deeper insights from the sales associates through interviews to identify Suunto’s customer profile. Finally, we will conduct on-the-ground interviews with fitness enthusiasts at sports events like triathlons and trail runs.

To further understand the characteristics and behaviours of Suunto’s customer, we will interview consumers that fit Suunto’s customer profile either through in-depth interviews or through focus groups discussions to better understand their perception of Suunto and their awareness of Suunto’s social media presence in Singapore vis-a-vis its competitors. Secondary research will also be conducted for social media data analytics.

Suunto’s core customer segment consists of fitness enthusiasts who are performance-driven and are typically in their early twenties to mid-thirties. This age group also represents the main users of social media platforms such as Instagram and Facebook.  According to TNS, 85% of 16 to 24-year-olds use Instagram in Asia Pacific, with Singapore’s penetration rate for Instagram at 63%.  Also, according to eMarketer, the projected number of Facebook users in Singapore 2017 is 3.2 million, which represents 54% of total population and 93% of total social media users.

As our two main goals lie in extending Suunto’s reach and increasing engagement through social media, we have developed a set of metrics in order to analyze the effectiveness of using Facebook and Instagram to deliver our messages.

o        Number of people who liked, shared or commented on post

In conclusion, our team believes that social media can not only increase awareness and reach, but also improve engagement, and generate positive sentiment towards Suunto Singapore. Given the high quality of Suunto products and its reputation as a trusted brand in the wearable sports technology industry, we believe that Suunto’s weakness lies in its underutilization of social media. This is especially apparent given the strong demand for wearable sports technology in Singapore and the high social media use among fitness enthusiasts in Singapore. Through messages promoting the Suunto lifestyle and building a virtual community around the brand, our team hopes to achieve Suunto’s business goals while benefitting Singapore’s sportsmen.